Emperor Naruhito ascends throne in Japan with ‘sense of solemnity’

Hong Kong, virus named after beer, neo-Marxist in ninja black garb & how we missed the elephant in the room

How business is recovering from COVID-19 in Southeast Asia

Emperor Naruhito ascends throne in Japan with ‘sense of solemnity’

Japanese Emperor Naruhito formally took up his post on Wednesday a day after the abdication of his father, saying he felt a “sense of solemnity” but pledging to work as a symbol of the nation and the unity of its people.

Former Emperor Akihito and Empress Michiko stepped down after three decades in their roles on Tuesday in a brief and simple ceremony, with Akihito thanking the people of Japan and saying he prayed for peace.

Naruhito, 59, technically succeeded his father just as Tuesday became Wednesday but his ascension to the Chrysanthemum Throne was formalised in a mid-morning ceremony, the first part of which his wife and other royal women could not attend.

ISIS Has a New Weapon: Fire

Naruhito, the first emperor born after World War Two and the first to be raised solely by his parents, expressed gratitude for their work and said he felt solemn at the thought of the burden he is taking on.

“I sincerely hope for the happiness of the people and further progress of the country, and for world peace,” he said in the Imperial Palace’s “Matsu no Ma,” or Hall of Pine.

In the first stage of the ceremony, imperial chamberlains carried state and privy seals into the hall along with two of Japan’s “Three Sacred Treasures” – a sword and a jewel – which together with a mirror are symbols of the throne.

They are said to originate in ancient mythology.

Naruhito was flanked by his brother and heir, Crown Prince Akishino, during the ceremony, which lasted about five minutes.

His wife, Empress Masako, was not in the room in accordance with custom barring female royals, but for the first time a woman did watch – Satsuki Katayama, who was taking part as a member of Prime Minister Shinzo Abe’s cabinet.

Masako, wearing a floor-length white dress and a tiara, entered the room for the second part of the ceremony with the other adult royal women.

Abe said Japan looked up to the emperor.

“We are determined to create, amidst the fast-changing international environment, a bright future for a proud Japan that is peaceful and full of hope,” he said.

US President Donald Trump, who will be the new imperial couple’s first diplomatic test when he visits Japan this month, extended his congratulations.

“As the Japanese people embark upon a new era, we will renew the strong bonds of friendship between our two countries,” he said in a statement.

Chinese President Xi Jinping sent his best wishes, according to state news agency Xinhua, as did South Korean President Moon Jae-in, who said he hoped that Naruhito would, as his father did, “remember the pain of war and continue to take solid steps towards peace.”

Japan’s ties with its Asian neighbours have long been plagued by bitter wartime memories, and while relations with Beijing have improved lately, those with Seoul are frosty.

Given the backgrounds of Naruhito and his wife, Masako, a 55-year-old former diplomat – which include extended experience studying and living overseas – hopes are high they may be more international in their outlook and closer to the lives of many Japanese.

“The curtain has gone up on a new era that will be filled with hope,” said Hiroshi Takahashi, 78, outside his ‘wagashi’ traditional Japanese sweets shop.

“The new emperor has an admirable personality and I hope he creates a fine royal household that expresses his own personality,” he said.

The last imperial succession in 1989 took place during mourning for Akihito’s father, Hirohito. 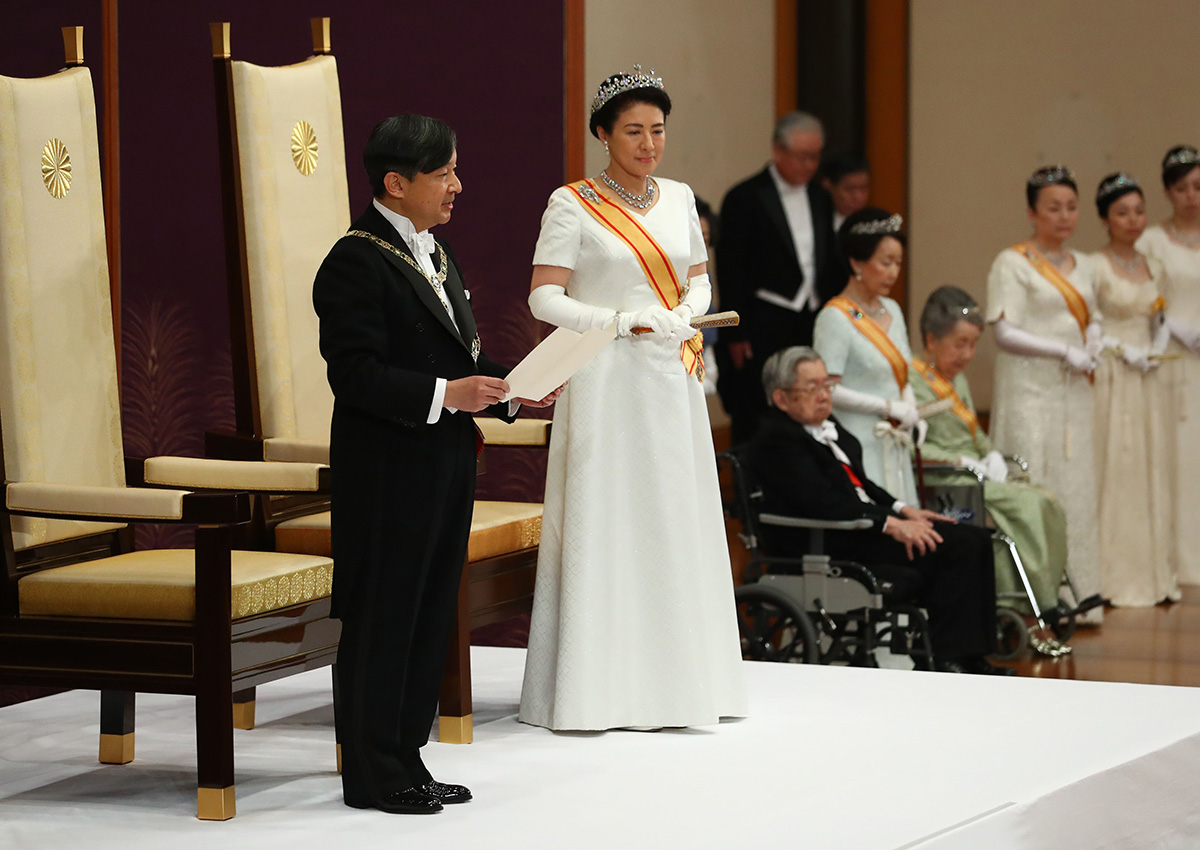 This time the mood is more festive. Japan has been draped in banners welcoming Reiwa – the name of the new era for Naruhito’s reign – during an unprecedented 10-day holiday.

Countdown events were held on Tuesday night in clubs across the nation, with people cheering as the clock ticked down to midnight and fireworks shooting into the sky in some areas.

His formal enthronement will take place at a more elaborate ceremony in October attended by dignitaries from Japan and around the world.

Though the royal family is broadly popular, opponents of the imperial system clashed with right-wingers at a demonstration on Tuesday, and the two groups had to be separated by police.

Naruhito’s passion for water conservation dates from his study of medieval transportation and includes an interest in other environmental issues. Masako has expressed an interest in topics related to children in trouble or living in poverty.

Though Masako struggled with a stress-related illness described by palace officials as an “adjustment disorder” that kept her largely out of the public eye for years, her public appearances have recently increased.